Home » Blog » The Science Of Creativity

The Science Of Creativity 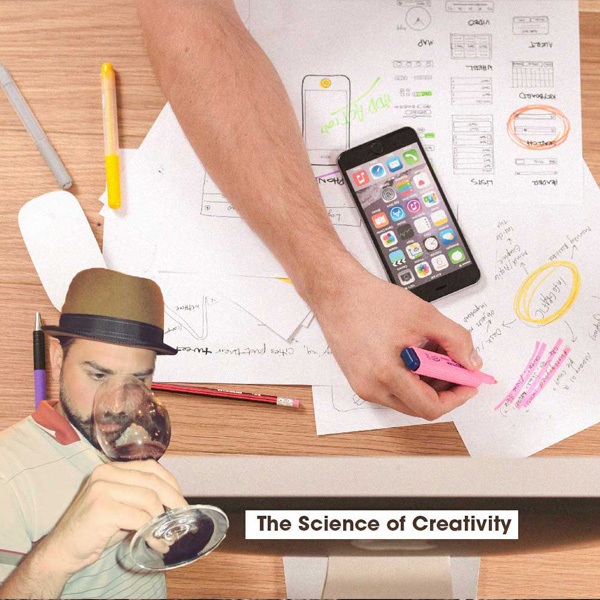 Have you ever wondered about the actual meaning behind the term creativity or thought about the science of creativity after drinking wine? The dictionary states that it is nothing but the use of imagination to create original ideas. However, what lies under this is a deeper meaning of the term that is quite mysterious and profound in nature.

With the rapid advancement of technology, there is a flourishment in creativity and innovation. With the constantly evolving competition, creativity has evolved into a more sought-after attribute in employees. In addition, almost every field that one could think of in this term has become synonymous with success.

Be it the unique puzzles to solve the mysteries of the brain so as to bring out its creative side or be it the groundbreaking technologies and inventions across the globe, it can be easily said that creativity is the most vital tool for human growth and progress.

Creativity as a Subject

With creativity, being a subject complex to its core, eminent psychologists have introduced the “Four-C” model of creativity. After that, we discuss the complete Four-C model.

This model helps in broadening the concept and differentiating the levels of creative expression. This helps in providing a framework for including creativity in the school curriculum and in helping students in developing their creativity into something more useful.

Learning is inherent and synonymous with creativity. Performing a new task always needs a bit of creativity from the individual. At the Mini-C level, the creative side is meant something that might not be revolutionary but is quite meaningful and praiseworthy for that individual.

When creativity is achieved at a professional level via years of deliberate practice and training one can pursue the prime purpose of doing what one loves. It is then said to be involving the Pro-C model of Creativity. A person might not be able to make a complete living out of it. However, they can definitely support themselves by doing what they love.

The creative genius, whose works would be talked about in the books of history, involves the Big-C level of creativity. One, whose life is an inspiration for all the persons who belong to the former three levels of creativity and is a visionary genius in their field is called the eminent person of this level of creativity. If you are reading science and history books and memorizing the works of certain individuals, it is pretty imminent that they belong to this level.

Nurturing The Science of Creativity in Children

A scary realization is cell phones can leave us brainwashed. We start to anticipate pings and check our devices religiously. We want entertainment to never be boring but being bored is great for sparking creativity. I’m suggesting we embrace being bored more often and allow employees, children, and adults this none activity.

In this paragraph, I discuss what James C. Kaufman and Ronald A. Beghetto describe as a more complete model of the Four C model. Moreover, they suggest we have only begun to start research creativity and understand its implications on the world. The original model has a great base for labeling particular creativity in a person but lacks nuance. 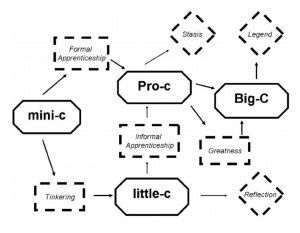 The lack of nuance is described as transitional periods that an individual goes through on life’s journey. Most importantly we need to remember the path to creativity can be unique to each person.

This will lead to Pro-C after approximately 10 years either in higher learning or structured mentorship. In addition, another path is created by playing around and experimenting by adjusting the course and making gradual improvements.

Reaching the Little-C level of creativity we have two transitional paths. In the Informal Apprenticeship an individual works with an older more experienced colleague. After that is a structured mentorship.

A trial and error section that involves self-reflection and experimentation. In other words, the underlying meaning of the play is at work here.

Not everyone desires to make it to the next level of creativity and those that are comfortable can reflect on past accomplishments.

The second-highest stage to reach as a creative. As a result, future generations will consider this individual as a Big-C.

Any Pro-C creator who stays in their professional career without making significant culture-changing discoveries. We see this with teachers who reach tenure and stop having a productive career verse those who choose to keep being innovative.

The final movement for Big-C. This is a superhuman-level achievement and everyone knows what they have created. For instance, Newton and Einstein are Big-C legends.

How We Find The Science of Creativity?

Firstly, I think most creativity starts with asking the right questions and playing around or tinkering. However, I don’t think we can look at these models and follow the path to reach Big-C. Secondly, becoming an expert on past people and ideas involved can lead to creative excellence. In conclusion, problem-solving and never giving up on failures can help with generating tons of ideas to make something great and reach legendary status.

Looking Deeper Into The Science Of Creativity

Really we draw on what we know and on past experiences to find creativity. At Creativity Scientist, we have a formula for creativity that involves your personal story. For instance, say you feel stuck or are having lack inspiration for a project. Think about using your story, industry (passion), and creativity to find the next idea.

Explore “A Breif History Of Creativity” to dig deeper into how we got creative.